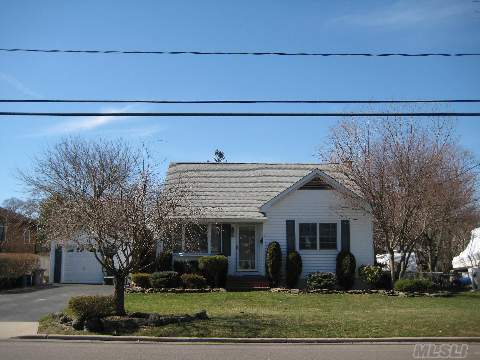 Houses that are of interest to us continue to be pretty thin on the ground so we set out on a rainy Sunday afternoon to see this one. There were a good number of people there when we arrived at about 1:30 PM. I’m still surprised that nobody has ever come up to me and said, “aren’t you that blogger?”.

I guess that my fame is a bit more limited than I’d like to believe.

For those of you who have been keeping up, this house was first mentioned back on March 15th by commenter Steele. At that point it was an exclusive by Hoffman East and was listed at $459K. Now it’s out on on MLS and is listed at $465K. So, a month and half on the market and no takers means…you raise the price six thousand dollars? This tells me that the seller is pricing the house based on their financial requirements, what they need to get for the house, not recent comps. Not a good strategy in any market, but a partucularly bad idea in this one.

As for the house itself, it’s nice enough. There’s no path to the front door, so you have to walk up the driveway and enter though the side door. I find this kind of thing very annoying, but it’s easily changed.

The kitchen is of decent size, recently updated but not top of the line. The countertops are green laminate and the stove is a cheap, electric model. Debra says that they must have spent a lot of money on the pulls, even though they are — in her words — hideous. The layout is well-done, though and the open floor plan flows nicely into the living room and dining room area. It makes the space seem bigger than it is and would probably be good for entertaining. The living room/kitchen/dining room areas have ugly tile on the floor, but the other rooms on the first floor have nice wood flooring.

On the first floor we also have two smallish bedrooms and a 3/4 bath (shower stall, no tub) and the den. The second bedroom isn’t too bad, but the third is pretty cramped.

The entire top floor is the master suite. The master bedroom is of decent size, bit certainly not huge. There’s plenty of closet space, although some of the closets are oddly shaped and/or crammed into corners around the roofline. The full bath on this level is OK. It’s got double sinks, actually two separate vanities, one on each side of the door as you walk in. The tub is small and the bathroom as a whole could use some updating, although it’s very usable as is.

There’s no door to the basement. There’s an open staircase leading down, making it seem more like part of the house. The basement is half-finished and the finished portion is sealed off in its own room. The finished room is big and is obviously being currently used as a bedroom. There’s a sump pump in the unfinished portion of the basement and all the appliances, the burner and the water heater are up on stands, which does concern me. But it was raining pretty hard when we were there and the basement did seem bone dry.

The backyard is big for Babylon and there’s a nice new deck. The detached garage is small and crammed with stuff. If we bought this house, we’d definitely want to put a shed in the back to make room for a car in the garage.

Bottom line? A nice house but way overpriced.  As I mentioned in the comments earlier, the most direct comp is 55 Livingston Ave. It’s a very similar house in a very similar location, although I think Livingston was nicer on the inside,  closer to the train, on a bigger lot and had lower taxes.  That house went for $445K, so I can’y see paying more than low 400’s for this place and  even that seems a bit much.