Well, last Sunday was Easter and I had to work anyway, but there were some open houses on Saturday and Debra ventured forth to see the one we might be interested in. The house report is based mostly on her commentary and my editorial input. That’s actually a bit ironic, considering that she’s the editor in the family.

As expected, the house is almost completely not updated.  However, other than the kitchen and baths, the rest of the issues are generally cosmetic. With lots of painting, removal of the awful paneling and similar work it could be a really nice house. That is, it could be with enough money spent on it.

The cabinets in the kitchen are original wood ones. The doors are probably not worth the effort to save, but you could get new doors and paint the rest. And there’s a couple of weird little drawers that waste space. It might be worth replacing it all, or some of it, anyway. The rest of the kitchen is worthless. The floor is awful. The appliances should be tossed out.

The rooms upstairs are quite big with reasonably high ceilings. The landing is wide and could be lined with bookshelves. The master is big and has three closets. The 2nd bedroom upstairs isn’t as big but is still a good size. There’s a small bath attached to the master. It has original blue fixtures that Debra likes. It’s only tiled around the bath, but the tiles there are mostly hideous. There’s a outline of blue tiles that matches the fixtures, and then someone put in darker blue marbleized tiles, most likely a lot later. We generally don’t like bath doors but these are amazing with 50s naked mermaids on them.

The bath downstairs is fairly big for the type of house and the era, but it’s horrible, tan fixtures and tile and they put in hideous “rustic” thick shelves to go with. There’s two more bedrooms, one a good size, the other smaller but still bigger than a lot we’ve seen.

The living room isn’t that big, but it’s not bad. It’s a real eat-in kitchen, and while they have it done in a kitchen-y way, you could do it more like a dining room and put the dining table there, it’s sort of a L-shaped living/dining room. Then you take a step down and there’s a long narrow dining room, but to be honest, with the eat-in kitchen, it probably wouldn’t get used except at holidays or if people were over.

There’s also a covered deck off the dining room/garage–the metal poles holding it up don’t look very new, but the fabric isn’t that old, it was totally dry even though everything’s flooded here. The yard is pretty big for Babylon, it’s a corner lot, but I can’t imagine there’s much traffic, it overlooks the park. The roof is 10-15 years old (or so the agent said.) The basement had been done a long time ago–half of it anyway. The ceiling is about 6.5 feet. There’s a bar! It needs work,but it’s bone dry–one good thing about looking at houses on a floody day. 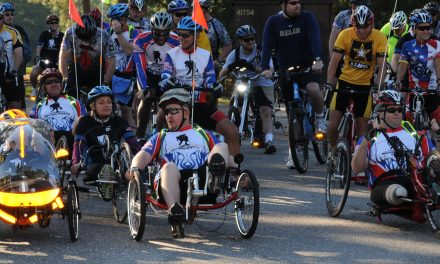 A Nice Flip, But Too Much Dough