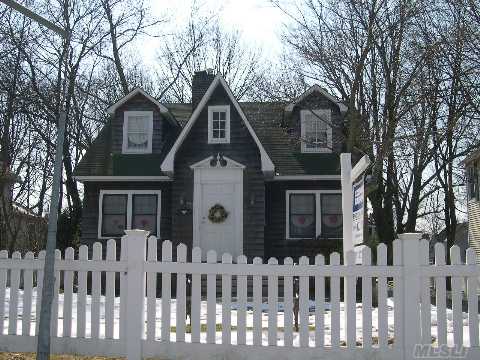 Sunday was a beautiful day for open housing. Over 20 open houses and more than a couple our price range. Sadly, I had to work. So I missed all the fun But my missus picked up the slack, packing up the baby and going to three of them without me.

The comments below are mostly hers.

This was the first house on the agenda and there were a lot of people there.

Wow, this is an interesting house. In a bad way. There were so many tchotches! Debra had the baby in the Baby Bjorn and thought she was going to turn around smash something.

The entire place was old and smelled it. The kitchen was small. It had fewer cabinets and less counter space than we have now. There were hideous wood-printed cabinets–although there was real wood inside, so I assume the carcasses are the originals. If you could open the wall to the dining room and took over some of that space and completely redid the kitchen it might be nice. Might.

The bathrooms are almost all original, but again, not in a good way. The walls are covered with that plastic marbleized stuff they did back in the 50s. Ugly. Debra told me that she’d heard about this stuff, but she’d never actually seen it.

Apparently the owner is a carpenter–which doesn’t explain the kitchen, but explains the weird closets all over the place, and the wood nailed on the walls in the bedroom downstairs. There was a scary doll in a full-sized cradle in one of the upstairs bedrooms. They had a huge finch cage–Aurora liked the birds.

The place did have a nice large unfinished basement with ceilings we could walk under, although not high ceilings. The garage had been built into so it’s doubtful that anything bigger than a Smart car would fit into it. There’s storage above and inside. The yard is small but OK and there’s a cute shed/playhouse. I think they keep birds in there in warm weather.

Debra’s verdict on the house: waaaay too much work for us. Needs a new kitchen and two new baths, stat. All the rooms need freshening–new doors, etc. It could be a nice house with a lot of money sunk into it, but we’re talking a lot of money.

There were quite a few people at the open house, but I think most of them agreed with Deb — too much work for that price.

Like Yogi says, it’s deja vu all over again. We saw this house back in June of 2007. You can read the first open house report. We really liked it back then and I was a little disappointed when it sold. So, here we are, a year and a half later, and it’s back on the market.

They fixed the broken tiles in the bath, and put in a new pedestal sink, but the bathroom is still as incredibly narrow as ever. It’s so small that you might consider giving up space in the living room to enlarge it a bit.

The biggest change to the house since the last time we saw it is that they’ve started to finish the basement. It’s been studded and the electrics put in, but the drywall and such isn’t done yet. They were putting in another bathroom, a playroom and maybe a laundryoom. The finished ceiling would be about 6.5′ or 7′ if lucky. Apparently the estimate was $17,500 and they paid $5000 already. They will include the plans with the house. And they put in a teeny above ground pool, it’s about 3′ deep. There were a good few people there–not as many as at Clinton, though.

The big problem here is the price. The house sold for $360K just a year and a half ago. There really haven’t been any major renovations. How do you justify $40K more when the market has dropped through the floor in that time period?

Debra says, “Wow. I love this house.” They did a great job fixing the place up. They replaced all the doors, even closet doors.

There’s a lot of room downstairs, although the flow in the living room is a bit odd. It’s possible that they don’t use it much if at all. There’s a weird little side bit with no furniture in it. It might might be a good place for a desk.

The dining room is huge and lovely. There’s a little bump out on one side that’s very pretty . Debra says she’d put a window seat in it.

The kitchen is very open. It’s all original with a great farmhouse sink, but very little counter space. It’s OK as-is, but it’s going to need some updating sooner rather than later. They have a couple of pieces of freestanding cabinetry for storage and to give counter space. There’s a nice full bath behind the kitchen. Debra really loves the farmhouse sink. It’s similar to the one her sister has out in her Montauk house.

The great room is wonderful, other than the gas fire-stove thing. It looks like a wood-burning fireplace but it’s gas with a remote. I don’t know how hot it gets, but the Realtor did say that the owners spend all their time in the great room with their year-old baby.

The staircase is scary to the upstairs is scary. It lists to one side. It might just need a little work, maybe a new banister, to make it safer. Still it’s bothersome.

The front bedroom is nice, a little small. There’s another nice, smallish bedroom in the back. Unfortunately, the only bathroom upstairs is inside the back bedroom. You have to enter that bedroom to get to the bathroom. The third bedroom is tiny.

The yard is huge and lovely and the deck is nice. It’s quiet inside with the windows shut. But during the summer the windows will be open and we’ll be hearing the road noise from this busy corner.

A Nice Flip, But Too Much Dough