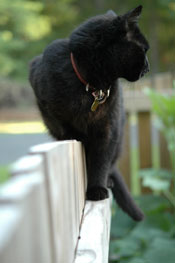 David DeFabiis of Hackensack has been house-hunting for more than a year.

He’s got a good job, a great credit score, a sizable down payment. He’s been prequalified for a mortgage.

“I’m afraid that a house I buy today will not be worth what I paid down the road,” he said. “I am concerned [about whether] I should play the waiting game some more.”

DeFabiis represents a new breed of house-hunter: the fence-sitter. In a National Association of Realtors survey this spring, 20 percent of Realtors said they have potential buyers waiting it out.

“They’re a very big percentage of home buyers now, people waiting for the market to hit bottom,” said Dianna Ivanov of Terrie O’Connor Realtors in Ramsey. “We have a standard Realtor phrase: ‘You don’t know when the market has hit bottom until prices start rising.’ “

I’m on the fence with Dave here. While I’m not saying that I’m waiting for market to hit absolute bottom, I would like to have some idea where the bottom is before I jump.

The idea of buying a house and then having it lose 10% of its value is disturbing, but acceptable. The idea of it losing 30% is frightening. The former mean losing a portion of my investment should things go south early on in the loan. The latter means that, if the house needs to be sold for some emergency reason, I lose my entire investment and then some. Plus, even if that never happenes. It’s unlikely that I’ll ever actually “earn out” on that investment, given inflation and the lost opportunity cost of the downpayment.

Do home prices in a desirable community like Babylon Village really have a 30% drop left in them. I’m sure I don’t know. But the concept is very disturbing.

As much as I’d like a house right now, I think I’m going to hang out on the fence with Dave for a while.