I was out walking around with my son today I saw maybe a half dozen police cars on Deer Park Ave, all with their lights flashing. The street had been closed off from S. Railroad to a bit south of Grove Pl. Parts of the sidewalk were cordoned off with crime scene tape. I didn’t want to bother the officers, so I didn’t ask any questions, but here’s the early word from Newsday.

The driver for a Farmingdale delivery company had just dropped off merchandise at a store and received a cash payment when he pulled his 20-foot box truck over on Deer Park Ave. shortly before 2 p.m., Suffolk police said.

The driver was in the back of the truck and preparing to drop the money in a rear safe when someone approached from behind, stuck a blunt object in his back, and demanded the cash, according to Det. Sgt. Robert Doyle of the Major Cases Unit.

The business isn’t identified in the story. Apparently the driver was robbed of the money and then locked in the back of the truck.

A delivery driver’s story of being robbed at gunpoint and locked in his truck Tuesday soon fell apart, Suffolk police said, after he admitted he stole the cash and shut himself in to help hide the crime

Cesar Ramirez, 35, was charged with grand larceny and making a false report late Tuesday after being interviewed at police headquarters in Yaphank.

The police were immediately suspicious of the driver’s story, seeing as how it happened in broad daylight on a busy street and there were no witnesses.

Every time I read something like this, it makes me think back to the time I spent on grand jury duty. Seeing the parade of doofuses and incompetents who were accused of various crimes made me realize that there just aren’t many criminal masterminds out there. Most people who break the law are complete idiots.

Still, there’s something else in this story that relates to the subject of this blog.

Ramirez told detectives he stole the money because he was three months behind on his mortgage payments, 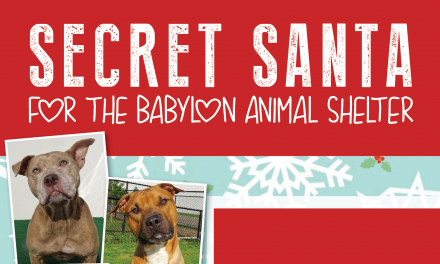 Become A Secret Santa For A Babylon Animal Shelter Dog or Cat!